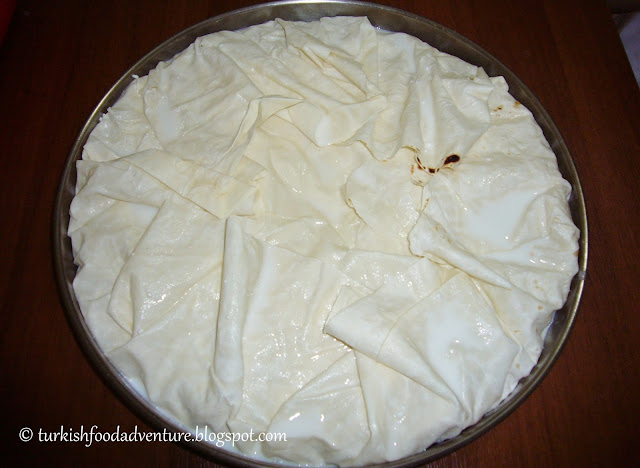 If you had been in Turkey, or at least if you had been introduced to Turkish Cuisine, then you probably know what is yufka. And if you do, then you also probably realized that most of Turkey’s so-called beş çayı (tea time) menus are usually made with yufka. While in most of the puff pastry recipes I’ve been posting usually involve yufka, most of the tea time recipes that I will be posting in the future will mostly include yufka, too.

So what is yufka?

To those who are unfamiliar with it, yufka is a round and very thin sheets of unleavened flour dough. It is used to make Turkish flatbread and pastries, and has been considered as one of the most important food items in the Turkish as well as in the Balkan and Middle Eastern cuisines. Some say that yufka may have been the earlier form of phyllo/filo dough. More specifically, Turkish yufka is usually made from wheat flour mixed with a little salt and water to form a dough.

To make yufka, the dough should be made to rest for just about half an hour or so after it is kneaded and rolled into large paper-thin round sheets (very similar to lavas) by using an oklava, a long roller used to make yufka. After the large thin sheets of dough are done, they should be heated or baked on both sides for just about 2-3 minutes on a hot saç until they get a slightly brown color. The saç is a round shaped hot iron plate commonly used in Turkey for making yufka and flatbread. 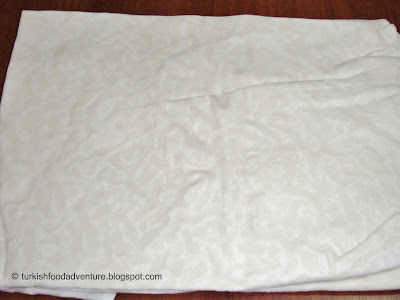 What are the types of yufka?

There are several types of yufka that are prepared in Turkey. One type of yufka that is prepared for immediate consumption is called günlük yufka – the ones that most Turkish women prefer to use because it is usually fresh and soft which will make any pastry (or for making rolls and wraps) more delicious. Günlük yufka are usually sold in açık pazarı (open market) as well as in bakkal or some small grocery stores. They are labeled günlük yufka which means they are daily fresh made Phyllo dough. And because they are fresh, this type of yufka has a very short shelf life so before buying them, you should read the son kullanma tarihi or expiration date to determine its recommended last day for consumption. Most elderly women who sometimes don’t have the chance or time to make their own yufka at home prefer to buy günlük yufka directly from the local vendors in açık pazarı. They say that the local vendors in open market areas usually sell their yufka cheaper and are more reliable to be freshly made than the ones that are sealed in plastic packaging sold in grocery stores.

Another type of yufka are the frozen ones.  These yufka are usually used for making quick and easy pastry such as sigara börek, tepsili börek, baklava, etc.  Their large round shapes are usually perfected by commercial dough rollers or machines that are specifically used to make phyllo dough. They are widely available in supermarkets and grocery stores and are nicely packed in air-tight packaging and have a slightly longer shelf life than günlük yufka.

On the other hand, yufka can also have a very long shelf life. These type of yufka are prepared for later consumption.  The sheets of thin dough are usually dried on a sac so that it can be stored for up to six months or more. These type of yufka are usually dry so they require a sprinkle of warm water to moisten its large round sheets and then covered with cotton cloth (while resting for a few minutes in room temperature) just before consumption.

My mother-in-law used to make her own homemade dry yufka in late summers and makes a bundle of them to keep until the cold winter days. To do this, she usually holds a tea time work party with her next door neighbors and friends where they joyfully sit down and chat as they skillfully work on making huge stack piles of yufka. It probably takes a lot of practice and effort to do this progressive rolling and stretching work to make a yufka dough to perfection. It’s a skill that requires time and the willingness to do this kind of thing that makes this culinary tradition a very impressive one for just within a few hours, these women can make pile after pile of dry yufka that’s suitable for storing even up to 6-8 months. And since it’s a teatime party, they do make some of the freshly made yufka into very delicious pastries with varieties of fillings such as white cheese, parsley, spinach or it can even be minced meat as well as ground walnuts or pistachios. They would just simply toss the stuffed sheets into the hot saç so gracefully to make a very tasty pastry served along with freshly brewed Turkish tea. J


Note: I have provided a glossary page for the Turkish food terms that I use in this blog, and decided to also add a Turkish “Food Items” category as well. This way, I can provide a more detailed description and image or photo to all the common food items in the Turkish Cuisine that I will be posting in this food blog.